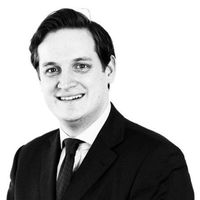 The Communities Secretary announced on 4 March 2019 a new £1.6 billion ‘Stronger Towns Fund’ for England. The fund aims to build on the success of City Deals, which were agreed in 28 of England’s biggest conurbations, and also hopes to give communities a greater say in their future after Brexit. Whilst it is clear how much each region will be receiving in total, little is known about how that announced Fund will be distributed amongst the various local authorities. The allocation isn't easy, and our analysis shows that different approaches could have very different local consequences.

We’ve come up with few different funding scenarios to demonstrate the impacts:

However, this method does not take into account the socio-economic characteristics of the areas which may make places more in need of funding than others.

Option 2 – allocation only to the most vulnerable places

Funding has been allocated per capita but only to areas that rank in the top 40% on our Brexit Vulnerability Index.  This results in 25 out of 39 local authorities in the North West receiving funding, whilst the remanding 14 receive none. Using this method Halton would receive £7.02 m whilst Eden would receive zero funding as it does not rank in the top 40% on vulnerability.

Option 3 – allocation based on a weighting according to vulnerability

This approach means that all areas receive funding but each receives a different amount depending on their level of vulnerability. As Halton is the most vulnerable of the areas, it would receive the greatest figure at £14.05m, whilst by contrast Eden which is least vulnerable would receive just £0.36m. 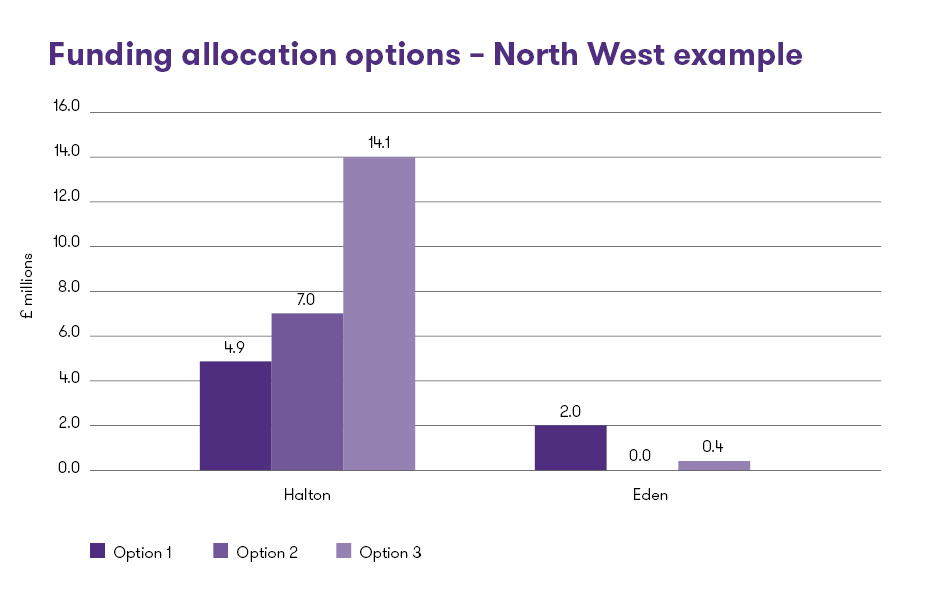 As shown in the bar chart above, the funding level varies quite considerably for Halton under the different options, illustrating that the method of allocation can have significant consequences for any individual area. Option 1 allows all local authorities to benefit from the funding, but funding will be skewed to larger areas, regardless of whether those population live in towns. Under option 2 some local authorities would be at risk of losing out on funding altogether, as seen in the Eden example. Option 3 seems more sensible as every area would benefit but the levels of funding would reflect the scale of the challenge.

The Communities Secretary announced on 4 March 2019 a new £1.6 billion Stronger Towns Fund for England.  £1 billion of the new fund will be allocated across the 8 regions using a needs-based formula, with the remaining £600 million being available through a competitive process.

However, it is still unclear how this regional funding will be distributed amongst the various local authorities. Given the wide variation in vulnerability levels across the regions, it is important that different allocations methods are considered.

Secondly, it is vitally important that local leaders have a strong handle on the dynamics of their places. Regardless of the amount of funding received in a time when resources are constrained and challenges are significant, it is vital that this resource is invested in a way that supports the specific objectives and purpose of the place.  If this money is really going to help create strong towns, it will have very different uses across the country.

To find out more about our research and data analysis tools or to pose a research question, speak to us at  insightstudio@uk.gt.com

Previously, we looked at the local implications of the cuts to current EU funding currently allocated to the 39 Local Enterprise Partnerships, and analysed who would have the most to lose after Brexit. In the light of Brexit, our  Brexit Vulnerability Index  assesses the different factors that are most likely to affect a place's ability to adapt to a post-Brexit world. If you want to find out more about the underlying socio-economic measures and  the places we identified as being most vulnerable to Brexit, have a read  here.  We have also identified a  relatively strong negative correlation between the proportion of residents who voted leave in the EU referendum and the Vibrancy of their areas, as measured by our VE index score, read more bout it  here.

Place Analytics  is an online platform that provides organisations with deep and rapid insight into the performance of individual places and the levers that fundamentally affect it. Through its intuitive user interface and suite of visualisations, benchmarking tools and proprietary algorithms, it transforms data into a clear ‘story of place’ that can be used to underpin strategy and planning with a robust analytical evidence base.

We also work with a wide range of organisations across the public and private sectors to support Brexit preparedness and contingency planning in those times of uncertainty and to enable the capitalisation on opportunities through our  Brexit Room services. 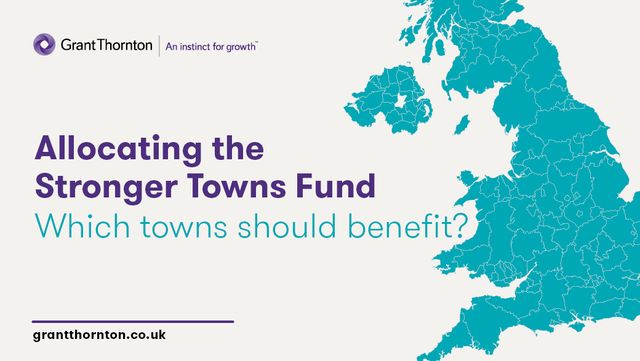 EU Funding Cuts – who has the most to lose after Brexit?
Rob Turner

Adaptability in a Post-Brexit world: the socio-economic measures that matter
Rob Turner

What is driving variation in the levels of long-term care?
Alex Khaldi

3% of school children in England have SEN statements or Education, Health and Care plans
Alex Khaldi

For plans and pricing, please contact our sales team at sales@passle.net

Sorry, you don't have permission to repost or create posts.

Your repost is currently a draft. Review your repost and request approval.

Sorry - this is not an option. This post already exists in the Passle you have selected.

Try reposting to another Passle.